Click here for information regarding the Coronavirus Disease 2019 (COVID-19) and court operations, including participating in remote hearings.

Electronic filing via Odyssey File & Serve (OFS) is available in all Vermont Superior Courts and the Judicial Bureau. For more information about OFS and the new fee structure for eFiling, please visit the eFiling webpage.

The Vermont Supreme Court is located in Montpelier. The court has five main roles:

History of the Supreme Court

In 1777 the first Vermont Constitution established courts of justice in every county. At its first session in 1778, the General Assembly created special temporary courts to hear cases. At a later session that same year, the Legislature established the Superior Court.

Before 1786 many of Vermont's judges were not lawyers. Judicial candidates simply tended to have strong common sense and a record of military or community service. The first lawyer was elected to serve on the Supreme Court in 1786. By 1789 all Supreme Court judges were lawyers.

In 1906 the Legislature changed the number of judges and separated their functions. The Supreme Court consisted of four judges who held hearings, or “terms,” in Montpelier. Supreme Court judges no longer had to travel to the county courts. In 1908 the size of the Supreme Court was set at five judges. It has remained the same since then. In keeping with modern practice, the judges of Vermont's highest court are now called "justices."

In 2010 the Legislature unified the court system into a single Superior Court, under control of the Supreme Court. The Superior Court has five divisions—civil, criminal, environmental, family, and probate. Each division has a unit in each county, except for the environmental division, which is a single statewide unit. 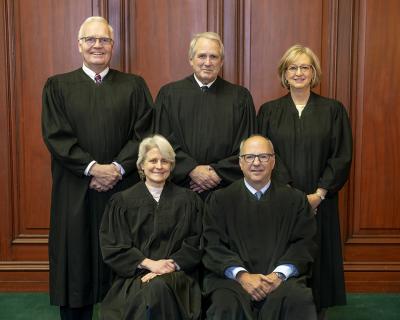 The Vermont Supreme Court is made up of the chief justice and four associate justices.

Justices are appointed by the governor from a list of well-qualified candidates prepared by the Judicial Nominating Board and are confirmed by the Senate for six-year terms. If a justice wants to continue serving after the six-year term expires, the General Assembly votes on whether to retain the justice in office for another term.

Each justice has a judicial law clerk to assist in doing research and drafting decisions. The law clerks are usually hired for a one-year term. You can find the court's law clerk recruitment notice, if any, here.

All visitors will be screened prior to entering the Supreme Court building.  Do not bring any weapons to the courthouse.  It is important to behave respectfully in the courtroom so that the proceedings are not unnecessarily disrupted. Not only is it necessary to show respect for the justices, it is also essential to show respect for the lawyers and parties who are arguing before the court.

Appealing to the Vermont Supreme Court

In most cases, after a trial court or an agency makes a final decision, you can ask the Supreme Court to review that decision. This is called an "appeal." You are not required to have a lawyer to appeal your case, but the process is not easy, and the law can be complicated. You can find information about how to appeal to the Vermont Supreme Court, including how to request an appeal, file briefs and other documents with the Supreme Court, order transcripts, and prepare for oral argument, here.

The Vermont Legislature sets most of the fees charged for services provided by the Judiciary. The Justices of the Supreme Court establish rules to govern the allowance of fees not specified by law. Motions or petitions filed by one party at one time shall be assessed one fee.

The Supreme Court resolves every case with a written decision. Some decisions are made by three justices, and some are made by all five justices.

Most three-justice cases are decided in a written “entry order.” This is also sometimes called a “memorandum decision.” These are available on the judiciary website, but are not included in the Vermont Reports. (“Vermont Reports” are published books of Vermont Supreme Court opinions.) These three-Justice orders are considered “unpublished.” They do not create legal “precedent” that binds Vermont courts in other cases.

Please note that the decisions on this website are not the official versions of the court's entry orders or opinions.

View the Supreme Court statistics report below for information and data on the following: